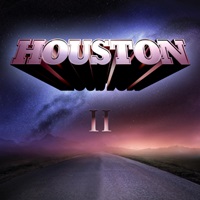 This Sweden band made quite an impression on the classic AOR crowd with their debut self-titled album in 2010- with lots of talk of a revival of the movement thanks to their stellar hooks and songwriting. "II" will be measured accordingly to see if Hank Erix, Ricky Delin, and Freddie Allen can make lightning strike again in terms of audience approval.

The first single "I’m Coming Home" is a smash hit, the keyboard line and vocal harmonies tackling classic Asia meets Boston, while the guitar break lays down a thick Neal Schon-like emotive ending. "Return My Heart" grabs you again with this comforting mid-tempo groove, perfect for those who were looking for a sing-a-long number to squeeze with their loved one a la Nelson or Rick Springfield. The band also understand how to lay back when delivering a sultry ballad, as "Talk To Me" is something one would expect from the self-titled Whitesnake 80’s era. Houston excels at using the larger than life keyboard tones- gliding along with Hank’s atypical vocals for this genre, as he has more of a smooth mid-range nature that is part pop/ part glam oriented and works well for their style.

Overall the album’s production values bring Houston into the sonic levels arena bands cherish, often using a theatrical set up as in the keyboard/ bass work for "24 Hours" that you would expect from Asia, Styx, or even Jim Steinman during his Meatloaf days- giving way to another solid harmony filled AOR track. My favorite currently is "On the Radio", the pulsating keyboard work bringing to mind the perennial AOR favorite "Fool’s Game" made famous by Michael Bolton, and I love the fading in guitars plus female spoken word element.

What seems amazing is Houston on the surface isn’t re-inventing the wheel. They know what makes AOR timeless, work off of their strengths, and as a result issue another stellar 10 song record that will satisfy their following and hopefully bring more to the fold.