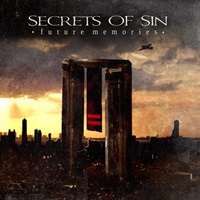 Southern German symphonic metal band Secrets Of Sin release their debut full length album "Future Memories"- gaining a new female vocalist in the process with Christina Glover. These 11 tracks clock in at a reasonable 58 minutes, presenting a down to earth melodic style with variant clean vocals from guitarist Robert Mansk and a sound that brings to mind early Within Temptation, Lacuna Coil, and a little bit of After Forever.

The atmospheric thunderstorm elements charge a stirring ballad like "Once Upon a Time", while the follow up "Inside" excites with this prominent cultural guitar line and symphonic keyboards that emphasize all the right trailing verses and chorus. The horn parts that start "The Joker" give the bouncy arrangement a playful feel, while the keyboards from Philipp Eiperle make this one of the more commercial offerings on the album, something that would excite Amaranthe fans for sure. "Puppet Play" has a little bit of a progressive orientation between the guitars and keyboards while Christina delivers the vocals in almost a futuristic meets fairy tale way.

I get the sense that Secrets Of Sin genuinely enjoy the interaction and dynamic exploration the symphonic metal genre gives them. It shouldn’t be long before the quintet ascends the ranks, as they have a domestically German quality to their brand of metal that should separate them from their influences. "Future Memories" keeps the focus on tight songwriting without overt bombast, something I wish more bands would think about going down the line.