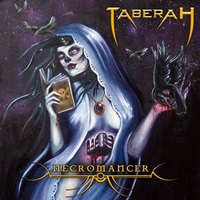 It’s always exciting to watch the development of a band- especially one who impressed you right out of the gate like Australia’s Taberah. In 2011 their first album "The Light Of Which I Dream" put the four-piece on my musical radar screen, developing strong vocal and guitar harmonies that would appeal to Iron Maiden and Blind Guardian fans as much as Queen- along with occasional nods to the solid hard rock ethics of AC/DC. "Necromancer" is the follow up, gaining the mixing services of Joe Haley (Psycroptic) and mastering from Stu Marshall (Death Dealer, Empires of Eden) to ensure another professional sounding product on display with these 11 tracks.

The one-two opening salvo of "2012" and "Dying Wish" showcases all facets of the Taberah sound. The former containing a firm bass line and guitar/ vocal harmonies on par with Maiden, Priest, and Blind Guardian, while the latter is more anthem-oriented in a classic Grave Digger style- riffs perfect for headbanging as the double bass beginning gives way to a straightforward 4/4 groove and the lead break from Jonathon Barwick and Myles ‘Flash’ Flood containing a number of cultural/ melodic nuances that are very ear pleasing. At times many riffs pulsate with a sense of drama and thematic significance- the title track containing cool back and forth choir/ normal vocal lines as the galloping/ epic guitars rise and fall with the double bass work. And when the band decide to move into ballad lands, like "Don’t Say You’ll Love Me" their affinity for Queen comes through again, along with the best in heavy power chords combined with tender acoustic touches that may make you think of Dokken and Tesla.

Older fans of "Tales from the Twilight World" era Blind Guardian will delight in Tom Brockman’s steady speed drumming against the variant power/ crunch riffs during "The Hammer of Hades", and the album closes with a faithful metalized version of Deep Purple’s classic "Burn". Taberah appears ready to hit bigger stages with their sound- they seem to be on the right path with diverse songwriting chops and obvious musical talent and ability.

Mandatory for those who love guitar oriented traditional power metal with loads of harmony/ melodic elements.