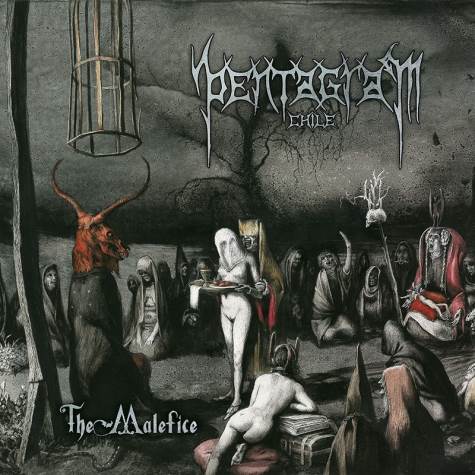 Pentagarm Chile (formely known as Pentagram but due to respect for Bobby Liebling and his Pentragram they changed name a couple of years ago) is a bona fide cult act. They have been forerunners of evil trash metal sporadically since their first demo back in 1986.  Since their inception "The Malefice" is their debut full-length so yes, they have not been too active during the last 25 years. A couple of demos and splits is all Anton Reisenegger & Co have to show for but their material have been put in high regard and it’s therefore pleasing to finally hear their first proper full-length.

"The Malefice" is a blackened thrash record that took me a couple of spins to really get into. At first it sounded like early Sodom with better production but after a while it grew on me and it has been on steady rotation the last couple of weeks. There are multiple strong points but maybe the strongest is Reiseneggers vocal. It just reeks of pure evil without sounding necro or anything. It’s just real angry and that does it for me. The material is quite diverse with a lot of cool arrangments and tempo changes on both the riffing during a arrangement and during the whole song as one. It’s not just full speed and no looking back,  but melodic parts that shine when they get their time in the spotlight.

One weak point in my opinion is the drumming. They do not fulfill their duty with enough fills or rolls, just keeping the rhythm going without being anything more. They leave that to the guitars that make up most of the songs with well driven riffing that are superb from beginning to end. Maybe not a bad thing after all.

"The Malefice" is a grower and it only gets better on each consecutive spin. Pentagram Chile proves why they are regarded as legends and hopefully we don’t have to wait another 20+ years for their next opus of dirty thrash metal.