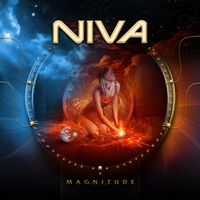 With two previous album releases in Japan, Sweden’s Niva seem poised to capture a broader audience with this third studio effort "Magnitude". Their first effort "No Capitulation" hit the streets in 1994- and the five-piece live for melodic rock, bright vocal harmonies, strong hooks in the guitar/ keyboard department, and an era where AOR ruled the airwaves. Vocalist Tony Niva possesses the resonance in his naturally high voice register, hitting all the right trailing notes in the verses and choruses of winning cuts like "Perfect Life" and "Always Somewhere".

On guitars Roger Ljunggren combines an affinity for veterans like Neal Schon and Steve Lukather with some elements of hard rock shredders- check out his energetic picking and tasteful breaks for "Never Too Late" and the power ballad "In a Misty Light". Overall Niva musically combine elements of Pride Of Lions and Survivor with Europe and 80’s California hard rock to develop catchy arrangements and loads of hooks and harmonies that you’ll be humming and singing at all hours of the day.

Niva should not be under the radar but one of the more popular acts in the melodic rock genre – and hopefully "Magnitude" gets the just accolades and audience support it deserves. Uplifting lyrical content about love and living for your dreams, happier chord progressions, and the multi-octave confidence that Tony projects in the vocals- this quintet deliver an 11 song record that could be the top album of this genre for 2013.