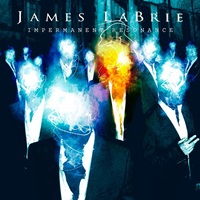 Never one to let idle time stroll by, Dream Theater vocalist James Labrie decided the time was right to release another solo album mere months before the next DT studio platter hits the marketplace. Ideally individual offerings give high caliber musicians a chance to expand their horizons, work with a different set of players, and as a result add a wider palate to the strong wealth of discography through the years. Joining James once again on the songwriting front is keyboardist Matt Guillory- and the other members include Italian guitarist Marco Sfogli, bassist Ray Riendeau, and Darkane drummer Peter Wildoer.

With the international musician ensemble it’s not really a surprise that the execution and arrangements have a driven Gothenburg/ Swedish feel- along with James stretching his voice into grittier terrain to match the proceedings (with supplementary support from Peter). I mean right out of the gate "Agony" has that guitar gallop and synchronistic spirit during the chorus that Soilwork/ Darkane fans love- if put through a slightly melodic filter. The follow up "Undertow" features those spacey/ gothic tinged keyboards that seem to be all the rage with Amaranthe and a mid-tempo groove element, along with killer melodic harmonies where James stretches to his higher range during the bridge and chorus.

The album continues along with this balance between instantaneous material tailor made for hook consumption ("Slight of Hand" and "Lost in the Fire") with progressive twists and turns done the Swedish way ("Letting Go" and the thrash/speed monster "I Will Not Break"). The shorter arrangements and simpler guitar/ keyboard play gives James an easier time to come up with melodies that audiences shouldn’t have difficulty mirroring, and yet he still pushes his voice to the max to match the energy and fury at hand.

The next logical progression from his 2010 "Static Impulse" effort, "Impermanent Resonance" should grab a good portion of the Dream Theater following, and also the fringe heavier audience that appreciate the Swedish / Scandinavian ‘metal’ ways. Well done, indeed.

PATRONYMICON – All Daggers Towards the Sky