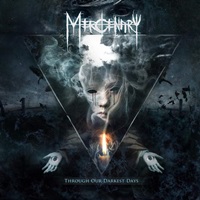 MERCENARY – Through Our Darkest Days

Bassist Rene Pedersen has taken on the dual clean/ harsh vocal role for Danish metal act Mercenary quite comfortably since the departure of both Henrik Andersen (bass/harsh vocals) and Mikkel Sandager (clean vocalist) in 2006 and 2009 respectively. The last studio album "Metamorphosis" probably is the closest the melodic death/thrash band has veered into the American metal-core style with more staccato, down-tuned laden riffing and grooves- and seemed to be met with a great deal of criticism from journalists and fans. I for one accept transition if it comes from a place of sincerity- so "Through Our Darkest Days" needs to be an album that proves Mercenary wish to be a major player in the metal community or they will continue to lose fans who feel they’ve lost their plot.

Simpler patterns in the vocals dictate aggressive, hypnotic musical patterns to follow- which makes "Welcome to Sickness" and "Starving Eyes" very commercial and easy to digest in a latter day In Flames meets Linkin Park way. As far as guitar parts, Jakob Molbjerg and keyboardist/guitarist Martin Buus Pedersen still lay down some thick, melodic elements (including a mix of acoustic guitars at times) on the title cut, "A Moment of Clarity", and "Generation Hate" that illustrate Mercenary’s roots- while also keeping in mind some of the circular work that Nevermore made well known in their "Dead Heart in a Dead World" album period. I wouldn’t say much of Mercenary’s songwriting these days is as progressive as "11 Dreams"- so be aware that keeping things basic allows for more of the arrangements to sink in quicker.

So what is the bottom line about Mercenary in 2013? I would say "Through Our Darkest Days" completes the transformation of the quartet, and I believe that the listeners that stick around accept the fact that the band is now more melodic power groove metal than anything thrash or death oriented. I admit that I prefer the early years to this material, but this album isn’t a total abomination and people just need to realize that Mercenary balances their European heritage with American oriented commercialism to come up with a sound ready to assault from the studio to the stage.