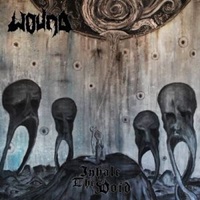 Remember the early days of death metal when artists were adding the raw fury of crust and punk into this faster, brutal sound? Germany’s Wound reverts back to those times with this debut album "Inhale the Void". Receiving much praise from the press worldwide, including a demo of the month award in their domestic metal bible Rock Hard magazine for their "Confess to Filth- Demo MMXII" effort last year, the quartet took 4 of the 6 songs from that demo, added 6 newer cuts and produce a straightforward example of death metal done the way of Asphyx meets Necrowretch.

You can feel the guitar strings flopping in the low tuned wind as well as Schettler’s demonic growls and blood curdling screams throughout "Echoes", the mid-tempo monster "Among You", and Asphyx-like epic "The Prince of Tyranny", complete with this marching off to war tempo feel. There’s nothing inherently commercial about their approach- and that’s fine in my book, because we need acts like Wound to remind us of the purity that started this genre and its long standing appeal with underground maniacs from all over the globe.

10 tracks hitting you in an instant 39 minutes, "Inhale the Void" comes at you with a primitive production and abstract cover art to once again prove Germany isn’t a land fertile in one particular genre of metal- and that quality triumphs in the end.

HATE FORCE ONE – Wave Of Destruction