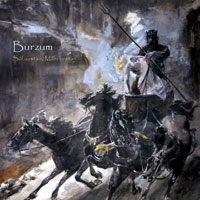 Let me make on thing clear from the outset: I love and cherish just about the whole Burzum discography, and I won`t deny that "Belus", "Fallen" and "Umskiptar", all of whom are wonderfully atmospheric and evocative from my point of view, made quite an impression on me. Heck, I even dig "Daudi Baldrs" and "Hlidskjalf" and think that there are some good songs and strong melodies to be found on them too. "From the Depths of Darkness" didn`t do that much for me, but I didn`t consider it to be a crappy album. When I read that "Sôl Austan, Mâni Vestan" would be an all-out instrumental album containing soothing, mellow ambient music, I was very much intrigued given that I like the majority of Vikernes’ ambient creations a lot.

Now, since I`m generally quite fond of the hypnotic ambient songs by Burzum, it pains me to say that "Sôl Austan, Mâni Vestan" is a bit of a mixed bag. The album is fairly uneven and not as consistent in terms of quality and substance as I had hoped for. Parallels to "Daudi Baldrs" and "Hlidskjalf" can be made, but there are also elements, sounds and melodies to be found that I associate with old songs such as "Han Som Reiste" og "Tomhet", which is a good thing in my book. It`s definitely a mellow and somewhat monotonous album as expected, but since some of the songs and melodies simply aren`t interesting or memorable enough one can easily lose focus and patience when listening to certain parts of it.

There are excellent compositions to be found on the disc, namely "Rûnar munt þû finna", "Haugaeldr ", "Sôlarrâs" and "Sôlbjörg". The aforementioned songs are haunting, beautiful, melancholic and touching. Sure, they`re simple and don`t really contain that many layers of sound, but they`re pretty damn efficient in terms of taking the listener onboard for a thought-provoking journey into times past. Even without lyrics or narratives those songs manage to raise different philosophical/metaphysical matters and ideas in the mind of the listener. The music does the talking, so to say.

My main complaint with this album is that there are too many filler-tracks on it, and "filler-tracks" is a word that I have rarely if ever used in relation to Burzum. Songs such as "Sôlarguði", "Ganga at sôlu", "Hîð" and "Mâni vestan" don`t really go anywhere and are pretty and anonymous and uninteresting to my ears. "Sôl austan", "Feðrahellir" and "Heljarmyrkr" aren`t that captivating, but they`re decent.

One thing that I find quite interesting is that "Sôl Austan, Mâni Vestan" is both melancholic and strangely uplifting at the same time. I can`t really describe it in any more detail than that, but I`m nevertheless intrigued by that particular aspect of the record.

"Sôl Austan, Mâni Vestan" is not a bad album as such, but rather uneven and inconsistent instead. It definitely has it its glorious moments, but unfortunately a little too few of them. I must admit that I expected a bit more from it than what I was served. In summing up, some songs are pure magic while others leave me somewhat indifferent. Your best bet is to give this album a chance yourself and make sure that you focus and are in the proper mood for it when listening to it. Maybe the whole thing will touch you deeply. Then again, maybe it won`t. I must stress that I`m not putting this album down, because it`s not a travesty or anything like that, but I can`t get around the fact that I was a little let down by it and that I consider it the least interesting Burzum output to date.