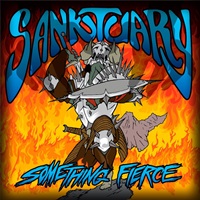 Hailing from the northern Canadian territory of Yukon, here is the debut album from the power thrash quartet Sanktuary. "Something Fierce" possesses that fiery guitar galloping that Iron Maiden and Annihilator made famous- but they also mix up the tempos to be slightly epic in nature a la Metal Church or Canadian compatriots 3 Inches Of Blood.

"Hail The Villain" for instance starts like a steady militant march before jacking up the tempo in the bridge and chorus to a culturally catchy thrash number- before again changing on a dime with bassist Cole Hume leading the way. Guitarists Glen Emond and Alan Binger certainly display adequate dual harmony and point/ counterpoint riff knowledge throughout- be it power, traditional, or thrash styles. Alan also handles the vocals, and his delivery is one of a sneering thrash meets power potency, a la Randy Rampage in "Thrill of the Kill" one moment than hitting helium highs for the follow up "Screeching For Vengeance". Gang choruses also bring the old school back to the new- allowing for audience participation for sure when Sanktuary play local gigs.

An interesting mix of arrangements- some quick and punchy like the 3:29 "Heat Lightning" and others spreading out the riffs into more of an epic, story-telling manner such as the 5:29 "Midnite Mass" that Omen fans will love. Are there times where I feel Sanktuary is a little too over the top with the vocals or clichés? Probably- but the spirit of metal shines through, and I feel the sincerity which probably wins over skeptics.

With comic book styled cover art topping off this lively production, "Something Fierce" could gain a wide swath of metal consumers seeking out a power/thrash act that aim for songwriting diversity.