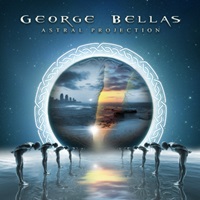 Another instrumental venture for guitarist George Bellas on this album "Astral Projection"- teaming up once again with drummer Marco Minnemann as George handles the bass and keyboard duties in addition to his dazzling proficiency on the axe. The 15 tracks mix up exotic scales, eclectic rhythms, and an overall outer world feel, as to be expected with song titles like "Dimensional Portal", "Rip in the Continuum" and "Magnetic Anomaly".

George certainly knows his neo-classical runs, but overall attempts to offer the instrumental fan a diverse selection in terms of dynamics and an openness of the sound- Marco given a fair pop in the snare department, allowing "Fabric of Space and Time" and the more ethereal "Curiosity" to set up consistent riff hooks and groove elements that keep the progressive sections solid. Do not fret guitar mavens- there are plenty of jaw dropping shred worthy sections to sink your teeth into, most evident with "Apparition" and the cleaner arpeggio work within the 7:20 "Visiting An Alien World" where the keyboard work is more Toto-like with grand flourishes accenting a lot of the syncopation between Bellas and Minnemann during the second half of the arrangement.

When I’m needing something mind expansive, "Astral Projection" serves its purpose. This is more down to earth than I expected, and as such should be taken into consideration when you live for the neo-classical type of progressive instrumental metal he employs.