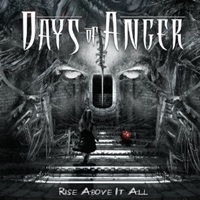 DAYS OF ANGER – Rise Above It All

Parting ways with former record label Massacre Records in September of last year, Days Of Anger is a three-piece Swedish band who didn’t remain in the unsigned ranks for very long. Italian upstart Coroner Records signed the group following a preview of this new material, and out comes an 11 song sophomore effort with the band determined more than ever to prove their might in the thrash/groove metal world.

Sonically the band intertwine this lower tuned, Crowbar aspect with definite nods to Sevendust, Pantera, and Machine Head on tracks like "Filled of Hatred", the crunchy "Bow Your Head Down" and vicious "I Am Death". Alex Johnsson as a vocalist has a duality to his delivery- calmer and slightly Robb Flynn oriented and then hitting the hardcore screams as if shouting with a megaphone in this monotone manner. Guitarist Alf Johansson certainly has studied at the altar of Zakk Wylde and Dimebag Darrell with his bevy of fast licks and effect tricks during some of these lead parts.

"Rise Above It All" is a study in contrasts- and one in which the mid-tempo and slower grooves seem to win out over the higher energy, thrashier material. Which is a shame, as Days Of Anger keep the riffing sharp and crisp with little excess on the title cut and follow up "A Case of Insanity"- but quickly lose my interest with all the extraneous sound effect set ups and long winded instrumental sections for the 7:29 ballad "Days Of Anger" or aren’t creating compelling songs that differ much from their influences as "Silent Asylum" would be left on the Pantera/ Machine Head cutting room studio floor.

As a result, Days Of Anger needs to decide where they want to place their creativity and move forward to develop something more original in the heavier groove metal category- or they will be forever stuck in a breakdown lane watching their American contemporaries shoot on by in popularity.