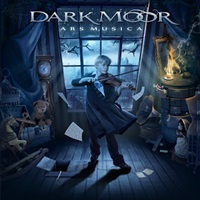 Spanish symphonic laden power metal band Dark Moor returns with their ninth studio album "Ars Musica". Their name comes from the infamous Sherlock Holmes novel The Hound of the Baskervilles by Sir Arthur Conan Doyle- and as a quartet has been fairly steady for three albums since the arrival of drummer Roberto Cappa in 2007 and bassist Mario Garcia Gonzalez in 2009. So it would be nice to see a few chances taken in terms of their sound as veterans can often become complacent or stagnant with their known style- fearful of losing the faithful due to natural growth.

The first sign of something different occurs early on with "It Is My Way"- as the framework, main melody, and general feel of the track appears to be more in the 1960’s pop tradition of say Paul Anka or Frankie Valli meeting up with Dark Moor’s natural symphonic tendencies. Guitarist Enrik Garcia knows how to deliver some stunning moments of his own, especially when given the chance to drive an instrumental section home with a slow building harmony – check out "The Road Again" for great lead spirits in the mid-section and conclusion as well as dramatic soprano vocals from guest female Berenice Musa. A little bit of a dance pulse seeps out through "The City of Peace", another number where the neo-classical background comes through as Mario and Enrik deliver arpeggio/ progressive -oriented solo spots.

Alfred Romero as a lead vocalist within Dark Moor morphs his delivery into power passages when called for on the high octane "Living in a Nightmare" as well as softer, more impassioned melodies for the ballad "Gara and Jonay". Recording again at New Sin Studio in Italy, you can tell the band appear very confident and comfortable to showcase all sides of themselves- even including a Spanish sung song "El Ultimo Rey" that appeals with their operatic/ symphonic sensibilities.

Overall, "Ars Musica" is a strong album in the genre and one Dark Moor can hold high in terms of quality and consistency.