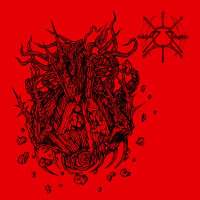 Living in Dublin, it seems like I see ZOM play at every single BM gig. Their well-intentioned but formless bludgeoning is usually my cue to head for the bar. I am aware of the interest their demos have garnered, but can’t really fathom their appeal. So obviously, I am hoping this is where ZOM change my opinion and show me what they can do.

I am a fan of bestial black/death metal, but have a couple of problems with "Multiversal Holocaust" from the outset. The first is the drum sound. Has some kind of effect been used? Whatever the case, the result is that the lack of clarity, while adding to the manky hellish atmosphere, subtracts from the music. This is worse at speed when the songs turn into mush (believe me this is even worse live). Next are the vocals. Once again they are so layered with effects that they lack any power or impact. Some of the guitar work is excellent, grinding along at dangerous speeds and the fact that its full force is deflected by the drum and vocals is what I have found so frustrating about this band all along.

The songs on offer here might make it hidden among a dozen others on an album but for a two song release I’d expect much more in terms of quality. Sorry to say, but for my money "Multiversal Holocaust" is flawed by ZOM’s emphasis on their sound rather than the songs. Not enough to make me anticipate a full length or keep me from the bar.

CLAYMORDS – Scum of the Earth