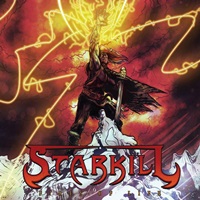 Forming in 2008, the Chicago-land quartet Starkill spent a few years developing their sound, releasing a self-financed EP under another name Massakren before changing into their latest moniker. Finally signing on the dotted line with Century Media, we have their debut album "Fires of Life" which should appeal vigorously to those in the extreme melodic death genre, but also those who love a little bit more of a theatrical modern film score side thanks to some of the keyboard orchestration at play.

"Whispers of Heresy" whirls by in 6:23 as a blistering opening cut, featuring high pitch dual guitar harmonies, extreme screams and growls from vocalist/ guitarist Parker Jameson, and this intense blasting tempo nature from drummer Spencer Weidner. The follow up title cut is more of a marching steamroller, the riffs in line with what you would expect from Amon Amarth meets Children of Bodom, along with a touch of Nightwish when the band choose to take the tempo down to conventional melodic means. There are numerous times throughout these 10 tracks where the keyboards invigorate the riffing and harmonies at hand- bringing to mind of course Dimmu Borgir and Rhapsody- as you almost imagine battle scenes coming to life for tracks like "Sword, Spear, Blood, Fire" and "Strength in the Shadow".

Even a little bit of Dragonforce comes up in some of the solo employment for Parker and fellow axe slinger Charlie Federici- but it’s not of the purposely sped up, over the top variety, just proper shredding and dive bomb tactics that advance the energy and aggression of each song. Starkill is one of those rare American acts that strike from the European metal perspective- using a wide palate of diverse classical elements to infuse their sound with strong riffing, pacing, and hooks that will induce much head banging. And with lyrical themes relating to mythology and medieval fantasy such as "Immortal Hunt" and personal favorite "This Is Battle; This Is Our Day", you know the words match the intensity of the music at hand.

"Fires of Life" is a great melodic death start for Starkill, and should be a great launching pad for a four piece with immense metal talent and character.