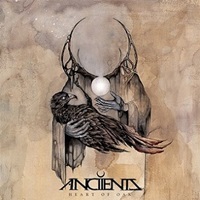 A four piece outfit from Vancouver, B.C. Canada, Anciients live for an interesting concoction of progressive rock, 70’s doom, and stoner metal on this 9 track debut album "Heart of Oak". Sonically dense with dual guitars and equally chilling dual vocal employment from Kenny and Chris (one part melodic, one part extreme), songs such as "Overthrone" and the lumbering 7:49 epic "Giants" take High On Fire’s engaging spirit, turn it on a dime with Opeth’s seamless progressive penchant and then add in a modicum of Thin Lizzy/ Allman Brothers Band jam mentality to create arrangements that are deep, provocative, and meaningful.

The solo section of "Faith and Oath" shows character and restraint, much like the days of Michael Schenker and Scott Gorham/ Brian Robertson when they lead the way for 70’s hard rock class- but the highlight song for me is "Flood and Fire"- the guitars chug and grind along at a modest tempo, while the rhythm section roars with groove fury. "Heart of Oak" is not going to be an album that you digest on the first sitting- and that’s okay. Anciients place enough dynamic contrasts and build-ups to keep you listening for deeper connection at the 10th stage as well as the 100th.

I can see this act gaining a diverse following beyond normal metal audiences into the jam-band network. Anciients look at the big picture when it comes to their brand of progressive hard rock meets stoner metal- you need to infuse longer arrangements with proper hooks, and they’re here by the truckload. Look beyond the odd moniker, as "Heart of Oak" will be an album hitting many a top of the year end playlist with critics, fellow musicians, and fans alike.