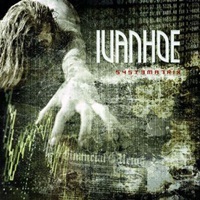 I remember hearing the debut album "Visions and Reality" from this German progressive metal band Ivanhoe back upon its release in 1994. The album featured then unknown vocalist Andy B. Franck- who would move on to front his own act Symphorce as well as join the power metal outfit Brainstorm. Upon his departure the band went through a quiet period before returning to the scene in 2005 with their fourth album "Walk in Mindfields"- and a new vocalist with Mischa Mang (ex-Dreamscape).

Now we arrive to their sixth studio record, the futuristic titled "Systematrix"- and the quintet appear to straddle the lines of maintaining their progressive metal style while venturing into elements of the modern scene in the hopes of appealing to the broadest market possible. The 10 songs feature a new guitarist in Chuck Schuler, as well as an adjustment in the songwriting chair as bassist Giovanni Soulas wrote a majority of the tracks. Stylistically, "Systematrix" appears to be more understated in its progressive elements, using a veritable color palate of softer dynamics and subtler time signature shifts to get the listener to engage in more of a cerebral manner.

Mischa’s melodies are equally provocative, entwining all facets of beauty, energy, and anger a la classic Geoff Tate in songs like the guitar/keyboard harmony laced "Tin Cans Liberty" and bouncy "Walldancer". "Madhouse" features some opening keyboard soloing from Richie Seibel that is more in line with 70’s acts like UFO or Toto than most neo-classically oriented players, while the three part closer "The Symbiotic Predator" goes all over the map musically and features some of the heavier, engaging interplay moments between all five that showcase their obvious training and experience within the genre. As a bonus for those who purchase the Digipak, you’ll receive two exclusives including an updated version of "Symbols of Time"- originally appearing back in 1995 as the title cut from their second album.

To my ears the best progressive metal albums become clearer with multiple playbacks. Whether the musicianship is technically chop heavy or just streamlined, there are usually many layers to peel away- and therein lies my appeal with "Systematrix" and Ivanhoe. For those who love latter day Fates Warning with a touch of European feel, this is an ideal record to add to your collection.

BRING ME THE HORIZON – Oslo – Rockefeller