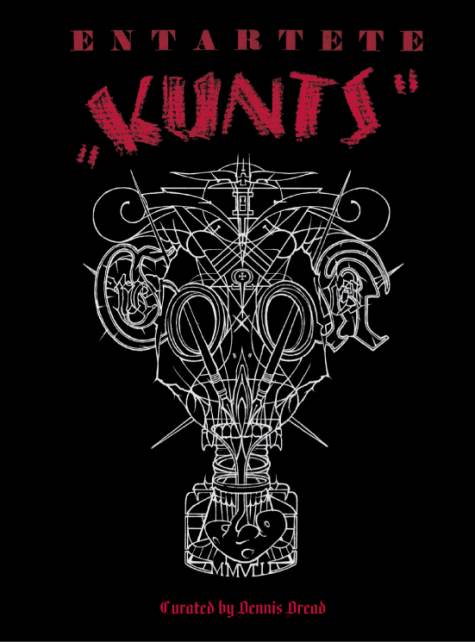 In 1998 Dread launched an art ‘zine called ‘Destroying Angels’- its mission to showcase the best (or worst!) of the art from the punk and metal scene of the day. Eventually this blossomed into an exhibition called ‘Entartete Kunts’, a play on words of nazi Germany’s ‘Entartete Kunst’, an exhibition of ‘degenerate art’. To cut a long story short, Dread decided to anthologise the work he had collected, and the product was this 340 page book, available in hardback in paperback (both limited editions) and containing 400 hundred or so full colour illustrations from over 40 international artists.

Many of those who fill out the content pages will be household names to the likes of us, for example thrash covermaster extraordinaire Ed Repka. Now, I won’t argue his inclusion, but I can tell you that I never need to see the cover of ‘Peace Sells…’ again in my life, so I don’t really know why it is included here. Ok, it is a classic, but haven’t we all seen it a million times? There is also Kristian Wahlin aka Necrolord and my personal fave Mark Riddick. No-one else marries the blasphemous sensibilities of BM and gut rotting DM quite as well as he does.

Then there are the musicians who create visual art: the weird and wonderful Nick Blinko, the sick and stoned Chris Reifert, Watain’s Erik Danielson with his excellent graphic work, Rob from Amebix, and of course Voivod’s Away.

There are many others whose work you will recognise even if you haven’t heard their names before:

Andre Bouzikov who did the fantastic Repka-esque covers for Municipal Waste’s ‘Art of Partying’ and Skeleton Witch’s ‘Breathing the Fire’, Jeff Gaither, who worked with everyone from Misfits to Guns and Roses, Sean Taggart (anyone remember those Crumbsuckers and Agnostic Front covers?). Perhaps less well-known, we have Timo Ketola (Deathspell Omega – ‘Fas’) who manages to conjure an esoteric world that perfectly suits the image of some of the more occult BM brethren. Then there is incredible Irish artist Paul McCarroll, who has worked with Primordial and The Exploited (and most recently Irish DM act Atheos). Also Luis Manuel Quiroga, whose style is instantly recognisable from his work with Cliteater and Impetigo. Another fave of mine is Arik Roper for his outstanding fantasy watercolour and gouache paintings that will be familiar to fans of High on Fire and Sleep. Last notable mention goes to S. Clay Wilson, who most will recognise as the artist behind the Accused’s ‘More Fun than an Open Casket Funeral’.

All in all, this is a pretty incredible book for anyone interested in the art behind the music. Sure, some of the inclusions are covers we’ve seen before, but there is so much on offer here that this isn’t a problem. The production values are way up there too. What most surprised me was the range of styles and material covered by this title. You will find everything from pen sketched fliers to oil paintings, both literal and abstract. You will find humour, horror, darkness and death, but also a playful and explorative spirit and the willingness to push boundaries that draws us to these genres in the first place.

My suggestion to Dennis and Anja Offensive is this: bring the book/exhibition on tour with some of the bands featured!