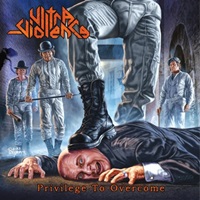 When your band name comes from Death Angel, it shouldn’t be surprising that the crux of your sound also develops from the Bay Area thrash movement. Such is the case with Torino, Italy’s Ultra-Violence, a quartet who formed in 2009 and unleashes a 13 song debut album with "Privilege to Overcome". Commissioning Ed Repka for cover art, you can’t fault the band for wanting to put their best foot forward in a time period where so many thrash bands compete for limited consumer finances.

The guitar work from Loris Castiglia and Andrea Vacchiotti possesses the same verve and spitfire tightness that put acts like Exodus, Death Angel, Heathen, and Testament on the map- they also display dazzling, nimble lead breaks that keep the melodies and hooks in mind. Gang vocals bring home the emphasis to many choruses, specifically "L.F.D.Y." and "The Beast Behind Your Back"- and the stop and go riff transitions give bassist Roberto Dimasi and drummer Simone Verre ample chance to change the tempo dynamics from up tempo to circle pit motions. The band also intersperse a short burst of punk-infused madness with the 56 second "You’re Dead" as well as showcase their restraint on the acoustic oriented instrumental "When Future & Past Collide".

At certain times Ultra-Violence also break into more modern movements with the death/black style speed trilling that opens the  6:57 closer "Ride Across the Storm" as well as the rougher barking screams that Loris employs throughout when it comes to his particular vocal delivery. Overall the production is crisp and clear, and I think as far as songwriters the four-piece bring a lot of versatility to the table, mixing up epics with shorter, heads down material sure to excite all generations into this movement.

An admirable start for these Italians, and I look forward to seeing how future albums develop.