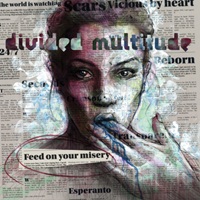 DIVIDED MULTITUDE – Feed On Your Misery

Progressive metal has been one of my favorite genres throughout my life. Even when the scene appeared plagued with Dream Theater, Fates Warning, and Queensryche knock offs throughout the 1990’s, there was hope on the horizon- and I believe Scandinavia comes to mind over the past decade with a boat load of musicians charting their own path of creativity and talent. Divided Multitude come from Norway, and I’ve had the good fortune to hear a lot of material from this band through the years- as they were one of the first progressive metal bands signed to then upstart Sensory Records in the United States.

"Feed On Your Misery" is their fifth album, an 11 track, 64 minute journey into the visions of a quintet who know that to keep a listener of progressive metal beckoning for more, they must carefully construct material with retainable riffing, hooks, and melodies while also injecting those musical performances that drop jaws, hands, and feet due to their virtuosity and brilliant composing abilities. The main vocals from Sindre Antonsen have a little bit more of a heavier, power attitude (think a rougher Russell Allen with slight Tobias Sammet personality/ flair for the dramatic elements) – and yet Divided Multitude kicks in some killer multi-part harmonies for many of the choruses that will bring Blind Guardian and Edguy to mind (check out the cat and mouse riff chase within the title cut as well as "The World Is Watching" for optimal listening). Expect instrumental breaks that aren’t mere one thousand notes in eight bar insanity movements- sometimes Eskild Kloften’s keyboard play moves with a slow purpose, at other times the guitars will feel out the proceedings- you can tell there’s forethought and emotion behind all that Divided Multitude accomplish on this recording.

A lot of times the band appear to use an almost melodic death metal guitar tone that promotes incessant headbanging- check out the opening riff for " 2 4 7" – which then transforms into a mid-tempo progressive metal arrangement where the drumming from Anders Vinje matches the stop/ start guitar/ keyboard action, as double bass punctuates the changes (check out the 3:31-4:01 section for the brain to execution dazzle parts). Most of the tracks clock in between 5 to 7:30 minutes- enough to give the quintet room to allow open motion but also not exhaust the listener with part overload.

Favorite tracks include the dramatic "Seconds" with thunderous crash cymbal moments and stair step guitar/ keyboard synchronization and the potent mid-tempo anthem "Scars" that should get crowd hopping and stomping. Those into Pagan’s Mind, Nevermore, and others that prefer song-oriented progressive metal over mere technical abundance would be well advised to pick up "Feed On Your Misery".

TRIBULATION – The Formulas of Death

THE MODERN AGE SLAVERY – Requiem For Us