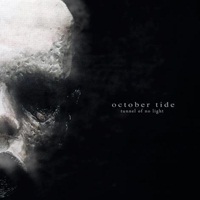 OCTOBER TIDE – Tunnel Of No Light

The fourth album from Sweden’s October Tide comes with a shifting of the membership guard so to speak. Following a heavy European tour schedule in support of 2010’s comeback effort "A Thin Shell", bassist Pierre Stam and vocalist Tobias Netzell would step down due to musical difference or family issues- so enter newest members Mattias Norrman (ex-Katatonia) on bass and Alexander Hogbom on vocals. "Tunnel of No Light" is an 8 song, 53 minute record packed with that dark, classic doom style the band always displays, along with extreme death vocals and this haunting sense of melody throughout.

Guitarists Fredrik Norrman and Emil Alstermark understand that delivering ringing chords at a snail’s pace needs to be constructed in such a way that you add spices here and there as well as change up the tempo of a given track that builds the aural tension. Check out "Our Constellation"- an 8:50 epic that features some killer early Katatonia meets Opeth heaviness, along with a steady stream of Candlemass and My Dying Bride in its sights, allowing drummer Robin Bergh ample opportunity to blow people’s minds with his forward thinking fills against monumentally slow snare hits. The follow up "Emptiness Fulfilled" features a series of minor chord riffs that almost sound heavenly hand delivered for the final days of life- the mid-section churning between heavier distortion and clean, echo-laden atmosphere.

Alexander slides into the microphone duties as a seasoned pro- his death roar complimentary, savage and sustaining chills on highlight numbers such as "Watching the Drowners" and relatively up tempo "In Hopeless Pursuit" (if you consider mid-tempo high energy). I guess there’s just something in their background and environment that makes Scandinavian metal of a sad, sorrowful variety all the more interesting: wrenching out the push and pull of anger, aggression and frustration into pure bliss.

Classic doom with extreme death vocals, "Tunnel of No Light" continues October Tide’s pursuit of outstanding releases- so do yourself a favor and reach out for this effort.