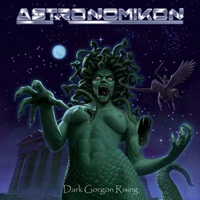 Vocalist Nicholas Leptos and bassist Paris Lambrou started Astronomikon as an outlet to discuss the great mythological tales from their Greek history. Already playing together in two other outfits Arrayan Path and Prodigal Earth, they assembled their current lineup with guitarists Stefan Dittrich and Sokratis Leptos and produce a debut album "Dark Gorgon Rising"- a concept effort about the first mythic hero in Greek tragedy, Perseus.

The 12 tracks on this record have a great cross section of classic power metal and epic heavy metal in mind- guitars that often convey a galloping nature while the vocals are full and commanding, almost as if delivered from the crest of a mountain. "Witch Hunter" may open with a sinister spoken word/ keyboard part but quickly merges into this mid-tempo arrangement filled to the brim with guitar layering and cultural harmonies that should make Warlord and early Fates Warning fans salivate. Nicholas uses a lot of his upper range throughout the album, easily able to ascend to Midnight/ Crimson Glory meets Fabio Lione/Rhapsody heights when called for, and also use an emotional palate depending upon the needs of the individual song. Some of his best work takes place on "The Spell I’m Under", using grace and tact as he climbs scales like the veterans of the metal field.

The story of Perseus, the hero who killer Medusa, tamed Pegasus and claimed Andromeda after rescuing her from a sea monster unfold as the album takes shape- a perfect backdrop for Astronomikon’s epic power metal oriented style. Overall I feel swept up by the music on display: never too melodramatic, keeping the keyboard work to a minimum effective element and allowing the Dittrich/ Leptos guitar duo the chance to reel off great hooks and soloing skills.

The talent is undeniable for Astronomikon- so "Dark Gorgon Rising" is a perfect album for those who miss Warlord, older Fates Warning, and old Crimson Glory. Picks to click include the exotic phrasing in "The Stone Abomination" and happier "Son of Seriphos" that has a trace of Helloween at heart.