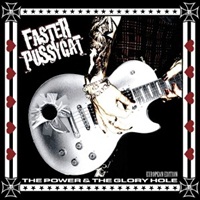 Many probably remember this California glam/ sleazy hard rock act if you followed the 80’s scene- songs like "Bathroom Wall" and the ballad "House of Pain" gained major exposure during the MTV video years. A combination of internal band strife, addiction issues, and the changing musical tide saw the band implode in 1992. Vocalist Taime Downe never really left the music scene though, forming new acts and biding time when the music he loved would come back to appreciation.

"The Power & The Glory Hole" is the first Faster Pussycat album of original material in over two decades. The new lineup includes guitarists Xristian Simon and Ace Van Johnson, bassist Danny Nordahl and drummer Chad Stewart- and with these 12 tracks appear to fuse a little of the industrial nuances of Taime’s 90’s outfit The Newlydeads with some straight forward hard rock that FP was more well known for. With song titles like "Porn Star", "Sex Drugs & Rock-N-Roll" and the title cut, the lyrics stay true to form in terms of the dirtier side of life. We also get a slower, more mechanized cover of Nancy Sinatra’s "These Boots Are Made For Walking" that doesn’t really add much to the proceedings.

"Gotta Love It" with the hypnotic, droning guitar riff and some outer world drum grooves is the best of the bunch here- and would have gotten more of a hearty review if all the material had this energy and songwriting class. For my ears, this version of Faster Pussycat is much darker and goes for the easiest, industrialized parts they can find that are utterly repetitive and assembled in such a way that I struggled to make a full pass through the album’s 47 minute duration.

I do not begrudge artists desires to broaden musical horizons as they get older. But the majority of people into the classic style of Faster Pussycat will want to scurry underground rather than subject themselves to this.