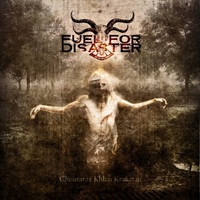 After pouring through some background information on the band’s Facebook page, confusion set in a touch regarding the musical description for the Norwegian five-piece Fuel For Disaster and their debut album "Chontaraz Khlan Krakatau". Including ‘svart metall’ as a part of your style would make me think of extreme vocals, blitzkrieg black metal riffs or intense drum patterns- but outside of the occasional scream and darker guitar tone, these 10 songs are more in line with slightly symphonic, modern power with occasional traditional overtones than anything black metal.

Songs like "Angelsweat" and "Echoes in My Sleep" contain a steady diet of double bass from Czar behind the drum kit as well as an interesting mix of power riffs and keyboards used in a darker Powerwolf manner. With clear production values the music gains immediacy for most listeners to get swayed by the dynamic diversity- "Fuel For Disaster" as an example has a dramatic, theatrical quality through the verses and the guitars and drums support the arrangement with equal fervor. Kezzar has an intuitive sense of when to lay back and chug along for melody/ hook’s sake and when to display more of his aggressive nature: "Reborn" and the follow up "Rising of the Tiger" showcase both sides as it appears the band enjoy combining 90’s Angel Dust with Kamelot and Mercenary as three acts of influence to the Fuel For Disaster style.

Chontaraz as a singer has a commanding voice: capable to project at multiple octaves with clarity while adding plenty of drama to the proceedings. I felt like I was listening to Tony Martin, Ronnie James Dio, and Nils Patrik Johansson at times on a faster, symphonic power song like "Break of Dawn" as well as the slower, 6 minute plus epic "The Shepherds Way".

I can see wide appeal in Fuel For Disaster- they have a catchy sound aggressive enough for the males and just the right amount of symphonic/ melodic parts to grab females. Seek out for sure if the above mentioned groups tickle the aural nerves.