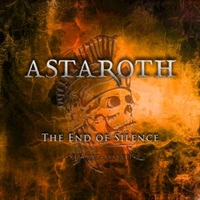 ASTAROTH – The End Of Silence

Transplanting themselves in the late 80’s from their Rome, Italy home base to Los Angeles, California, the traditional, speed oriented metal sound of Astaroth didn’t find favor with the record companies flocking to the commercial hair acts. So breaking up in 1988, three of the members ( bassist Saverio Principini, guitarist Max Cipicchia, and drummer Jan D’Amore) remained in the US to pursue separate careers in the music scene. After an 18 year layoff, the three band mates come together again, slowly recording ten unreleased songs originally scheduled for their follow up to 1984’s "The Long Loud Silence" debut EP.

Hooking up with an American vocalist in Ace Alexander, "The End Of Silence" finally sees the light of day- and all who love guitar oriented power hooks, marching drum tempos, plus call and response verse/ chorus work vocally will love tracks like "Neros Fire" and "Dreams Die First". Musically Astaroth straddle the lines of British inspiration with American execution: artists like Iron Maiden, Judas Priest, Leatherwolf, and Liege Lord come to mind between the stylistic chemistry of the quartet and the organic tonality and production qualities. Ace’s voice has the Dickinson/Halford air-raid charm, yet also a lower range finesse that allows him a chance to navigate verses within "Dilemma" and the lighter, more mid-tempo commercial arrangement "In Spite of Destiny" with personal warmth and charm.

Had this come out in 1988, it may have been lost in the shuffle and furor over thrash metal and glam acts. As it stands, the material on "The End of Silence" doesn’t sound dated in the slightest. Seek this out if you desire classic metal with equal parts of European and American inspiration and execution.

YEAR OF THE GOAT – Angels’ Necropolis