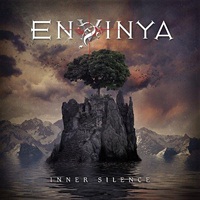 An intriguing six-piece from Germany, Envinya on their debut album "Inner Silence" combine traditional metal with elements of power, speed, and modern heaviness to develop something that could gain a wide spread following. The female vocals of Natalie Pereira dos Santos reside in the Nightwish/ Within Temptation vein, while musically the members approach things with a darker veneer, even as the keyboards dance around in a power/neo-classical way.

"Faceless" may start with a swirling amount of keyboards from Moni Strobl, but by the 1 minute mark the guitars from Thomas Knauer and Markus Herz kick into gear, some of the riffing jackhammer-like in an older Metallica/ Squealer meets In Flames way, including some impressive blast beat moments during the conclusion from drummer Enrico Jung. When the band slow things down to a mystical framework such as the hypnotic title cut or a moodier, The Gathering-like "Mirror Soul", you really understand the attention to use the perfect riff and accents that make these songs so special and distinct compared to their contemporaries. "Too Late" is one of my current favorites, the main keyboard/ guitar interplay parts very infectious and some of the drum rolls reminiscent of "Creeping Death" while Natalie doubles up some harmonies to make a magical arrangement from start to finish.

Given the cross-pollination success of Sweden’s Amaranthe with its multi-pronged vocal approach and modern melodic power/death metal sound, it’s only inevitable other nations and musicians would give their own take. "Inner Silence" is a fantastic example for Envinya of a band willing to take its time, hone in on their songwriting craft, and the final results are breathtaking.

What a start to 2013. Who said symphonic elements had to be stripped of power and heaviness? Not this act and not this album. It’s understandable why their previous demo and EP material got rave reviews from webzines and major magazines in the European market- do not be the last to hear this newcomer on the ground floor.