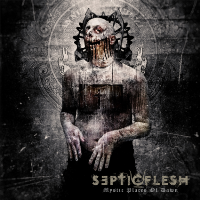 ‘Mystic Places of Dawn’ was originally released in 1994, setting Septicflesh on the road to becoming one of the brightest stars in the pantheon of Greek metal. Their take on melodic symphonic death introduced listeners to what was then and still is one of the most original voices in the genre and the elements of melancholic doom added depth and atmosphere to complete the package.

Almost 20 years later and ‘Mystic Places of Dawn’ has weathered well. The production (re-mastered for this edition) still sounds modern and the flanged guitars create a hypnotic feel that evokes the mythological past and the fantastic elements of the narrative. The guttural vocals work well against this background and the keyboards add brightness, like rays of light shining through the gloom of a deserted temple.

As so often happens when a band with so many ideas finally creates a debut full-length, there are places where it feels like there are just too many things going on and the album becomes a little unfocussed and loses the listener in places. Overall though, the balance of mesmerising and impactful material is generally quite good if the listener is willing to be patient and give their full attention to what is happening. Why are the Greeks so good at that dreamlike, repetitive, rhythmic material?

While this is a very strong debut it sometimes lacks coherency and rambles off into the wilderness. Having said that, it is hard to think of an act of this type who can pack so many hooks into their tracks. This version comes in limited edition CD and vinyl formats containing four bonus tracks, comprising the re-mastered ‘Temple of the Lost Race’ EP in its entirety. These are a little more raw than ‘Mystic Places’, with the keyboards lower and the guitars sounding positively dark and forbidding. In my opinion these are the best tracks on the album, but then I like my music a bit more direct and hard-hitting.

If there was ever a time you wanted to pick up either of these early statements by Septicflesh, now looks like the time to do it. If you’ve any interest in this type of music, check ‘Mystic Places of Dawn’ out.