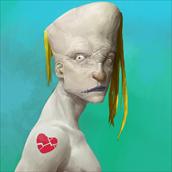 Did you say deathgrind from Norway? That’s not the most common genre we are accustomed to up here north, but that doesent mean we cant deliver the goods.

Grotesque Hysterectomy hail from Oslo and "Sororicide" is the groups second offering since their debut "Reek" back in 2007.
"Reek" was an album I found quite entertaining with their Carcass/General Surgery influenced grind. There was some expectations to "Sororicide" based on that but I am sorry to say that after a massive amount of spins I don’t think the latter reaches up to the former. The grind parts have been replaced with more straight forward death metal (witch of course is ok if you where expecting an death metal offering) and the songs are more melodic than before. GH does on the other hand handle the transition very well and "Sororicide" is an massive slab of relentless death metal with grinding parts all over. The arrangements works fine and one thing I dig is the clear and present bass sound. Production wise this is top notch where both the instruments and the vocal (that often get lost in grind productions) are easy to decipher.

All over have GH managed to deliver  on most accounts and even though the album is only 27 minutes in length they prove that they master their craft and are an force to be reckoned with in the (soon to be) overpopulated Norwegian extreme metal scene.