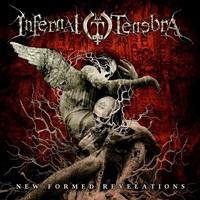 The Croatian quartet Infernal Tenebra began in 1999 with a black metal sound, evolving into death metal over the years. "New Formed Revelations" is their third studio effort, an 8 song, close to 39 minute record that doesn’t sacrifice in its melodic moments for the sheer extreme forcefulness at hand. For every serene acoustic opening or solemn soundtrack setup you can expect the main hook or riff to be crunchy, speedy, and down tuned to the extreme.

Rhythm guitarist Darko Etinger also tackles the death growl duties, employing screams of despair while often mirroring the riffs in a syncopated fashion such as the off time work in "Entropia" or the slightly atmospheric meets blasting arrangement within "One Minute Silence". Even the mid-tempo riffs that would cause other fans to decry ‘sell out’ shouldn’t intimidate Infernal Tenebra’s followers, because there is still a sense of undying commitment to heaviness, brutality, and construction of individual songs. Lead guitarist Ivo Petrovic has his theory and shred chops down pat, ripping away during the lead breaks with the best of Morbid Angel, Death, and Slayer in mind- check out his delivery on "The Art of Survival" and "Blood Stained Canvas" where I’m sure he’ll exhort hearty applause.

The mixing / mastering from Jens Borgen brings the ferocity to life- and I think more labels will begin to look at Croatia’s scene as a result of "New Formed Revelations". You can sense their appeal could go beyond a conventional underground death crowd into possible thrash touring bills- so if you need a band that can bridge the genres Infernal Tenebra may be worth your energy to investigate.