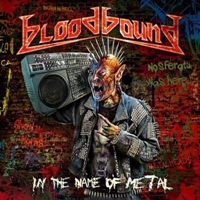 BLOODBOUND – In The Name Of Metal

There’s something to be said about consistent productivity in today’s music marketplace. During hard rock and metal’s 70’s germination, acts needed to record new albums often every 6-9 months to keep up with record company demand and allow the touring machine to rake in as much money as possible. The model seems to be reigniting due to the shift in digital media means of consumption- meaning if bands desire to make a living at their craft, they need to revert to touring and merchandising to stay afloat.

Sweden’s Bloodbound started in 2004 and have released their fifth album since 2006 with "In the Name Of Metal"- focusing more on their affinity for the genre in a similar stance as classic Manowar or contemporaries like Nocturnal Rites and Dream Evil. You can’t take yourself super seriously with titles like "Metalheads Unite", "Mr. Darkness" and the obvious title cut- but the sextet pull together a steady set of mid-tempo anthems and fierce power numbers that should have no trouble sliding into their set lists as they tour behind this release.

Vocalist Patrik Johansson knows when to go full force with his patented Tobias Sammet-like shrieks and where it’s better to keep the melodies within mead hall/ festival oriented range- and lead guitarist Tomas Olsson often keeps his solo segments stringently in line with the rhythms and riffs to develop even more cohesive, easy to retain songs like their mentors Accept and Iron Maiden. Favorites change on a daily basis, but for now the Accept riffing meets Edguy chorus for "Bonebreaker" and melodic, stair step militant march within "King of Fallen Grace" make me instantly raise a devil’s horn salute.

And how can you not love the art work- the graffiti messages, the old school boom box, the studded leather jacket, and the man who would send shockwaves to the conservative masses yet elicit praise amongst his peers letting you know we aren’t in for a ‘pop’ experience here. Bloodbound isn’t out to innovate- they merely stick to tried and true power/ traditional concepts and execute them to the highest extent possible.