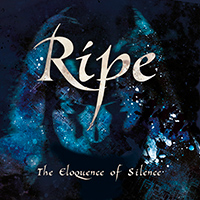 RIPE – The Eloquence Of Silence

According to my research through Metal-Archives, "The Eloquence Of Silence" may be considered the second album by Danish heavy metal band Ripe, but if you include their 2008 full-length "At the End of Time", this is their third record overall. Splitting hairs maybe, but I think it’s important to know so that the readers are aware of the significant songwriting prowess and class this quintet exudes on their latest effort.

Ripe possess a guitar driven, melodic hook sound- the tempos lobbed in a mid-tempo or slightly faster energetic manner. Firewind, Pretty Maids, and other bands in that melodic power ilk come to mind most when taking in fantastic tracks like "Saint of the Scar", "Dreamwalker", and the early 90’s Maiden-esque "Porcelain Goddess". Vocalist Michael Bastholm Dahl has a natural high register and an ability to hit harmonies that make the chorus work that much easier to grab ahold and engrain deep into your cortex. The band also veer into modern rock territory with the half acoustic, half electric number "Song for a Shadow"- something that could appeal to fans of Alter Bridge or 3 Doors Down and features some cool verse transitions between both guitarists as bassist Lars Byskov Madsen keeps the low end riff on course.

Not everything hits my ears exactly as I desire- the bluesy swagger meets modern Metallica feel for "Above Inside" isn’t in Ripe’s dynamic songwriting wheelhouse as I feel they are better off exploring more of the straightforward melodic, traditional, and power influences at their disposal. Time will tell how Ripe’s productivity will diminish now that Michael is the vocalist for one of the premier thrash bands Artillery- but one hopes he’ll make the time for both acts. "The Eloquence of Silence" is a high class heavy metal record, another outstanding effort from the Danes.