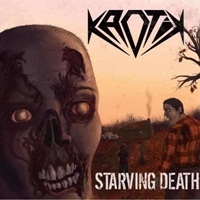 Quebec, Canada has been one of the places where not only metal has thrived in good and tough times, but most evidently the work of death metal. Gorguts probably were the premiere breakthrough, influencing many teenagers and young adults to pick up an instrument and creative their own waves in the local scene. Quebec City natives Fred Tremblay and Samuel ParE picked up guitars and started Kaotik in 2007- gaining drummer Jeff Tremblay, bassist Alexis Goulet Bouchard and vocalist Pierre-Luc Simard a short time later. After a small EP "New Born Khaos" hit the streets in 2009, the band set their sights on creating this debut full length album- recorded locally and gaining a mixing/ mastering job from Dan Swano.

So what will you hear through these 10 songs in 51 minutes? "Starving Death" lives for the old school death principles- intertwining much of the European movement with a touch of the slower, doomier aspects of certain American bands. Pierre has a growling drawl much like John Tardy of Obituary- only more discernible- through winning fist pumping numbers like "Creature" and "Bad Awakening". The rhythm section is pliable to charge forward with semi-thrash measures if need be- but often lives for hammering home with the riffs in a dirty, down tuned fashion as "Screeching Sound" lives up to its title as if a series of bees honing in on their prey.

Kaotik have a mix of Morgoth, Entombed, Pestilence, and Obituary in their sound- the sense of apocalyptic vision as the riffs unfurl, sometimes in an ascending fashion with speedy trilling or at other times drop tuned with simplistic grooves made for windmill action. From opener "War at the Door" to the scary epic ending "Inbreeding" with Alexis taking the bass lead at times, Kaotik feel perfectly at home in a direction that Asphyx and Hail Of Bullets know has met with fan favor.

Sure to separate the true believers from the ones who think they know the genre.