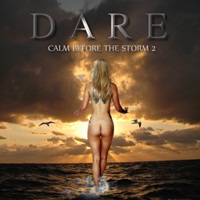 DARE – Calm Before The Storm 2

Singer/ songwriter Darren Wharton in current times is part of the reformed Thin Lizzy lineup touring the globe- with Dare being his own original melodic rock/ AOR band. "Calm Before The Storm 2" is the seventh studio album from the group, with Darren finally securing the rights a decade beyond its original release. Rather than merely put the album out again as is, Darren and his band mates completely re-recorded the songs, along with adding a couple of unreleased efforts "Precious" and "Cold Wind Will Blow" that change the order of the album.

Overall Dare possess a tranquil sound with nuances of American and Irish/ Celtic cultural structure and textural feel. Darren’s voice has that soft, plaintive quality that brings you to ease with a Richard Marx meets Richie Sambora sound through a ballad like "Silence of Your Head" just as much as a mid-tempo anthem go getter like "Someday". Guitarist Richie Dews employs a mixture of acoustic and electric guitar lines throughout these 11 songs, the Irish/ folk elements coming through in a soft rock spectrum on "Calm Before The Storm" and occasional forays into the blues for "Ashes".

The younger generation may not understand this lighter side of rock that Dare make their foundation- but their parents certainly will. Heartfelt emotional lyrics looking at life experience coupled with years of touring and creativity at their disposal- "Calm Before The Storm 2" soothes as modern anthem rock with  Celtic/ Irish overtones should.