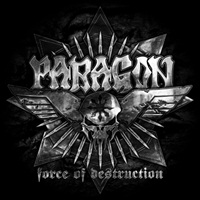 Proud and bold, traditional metal captures my head and heart for it brought me to this movement and forever it will stay as a first love. Germany’s Paragon are one of the consistent purveyors of heads down, ‘balls to the wall’ riffs, pounding bass and drums along with a singer adept in the ways of raising notes, fluctuating his range and also emphasizing the key elements to the movement. I’ve been fortunate enough to follow this act’s discography since their second album "The Final Command" in 1998, slowly climbing the ranks with high critical marks in major European metal magazines and also appearing on great tour slots with Gamma Ray, Labyrinth, and Iron Savior through the years.

Four years beyond their last studio album "Screenslaves", new record label Napalm Records enters the fold for their tenth record "Force Of Destruction"- and once again the band prove their power and semi-speed attack hasn’t succumbed to any commercial pressure or as they get older soften their ideas. Multi-part vocal harmonies embed the choruses fervently for instantaneous tracks like "Iron Will" and "Bulletstorm". Guitarists Jan Bertram and Wolfgang Tewes can also slice your brain with an epic, semi-doom feel on the 8:16 "Blood & Iron", a track that would make Dio and Candlemass fans throw the metal sign out freely.

Vocalist Andreas Babuschkin may not rate in the top tier with a Dickinson, Dio, or Halford in terms of pure clean power, but his rougher around the edge voice fits the heavier and speedier material accurately and with a fierce personality touch on favorites like "Blades Of Hell" and the charging closer "Secrecy". Long-time producer Piet Sielck adds his magical touch once again- as the skull and blade cover art will make quite an emblem for their fans to relish.

"Law of the Blade" remains their high water mark in terms of overall top to bottom songwriting through the years- but "Force of Destruction" could elevate itself to a very close second based on my month long airplay. Those who live for bullet belts, studded arm bands, leather jackets or denim vest with all the band backpatches you can fit need a little Paragon in your lives.