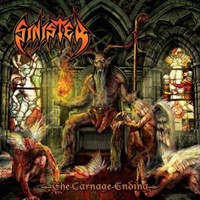 What do you do if you are a singer in a death metal act and your whole lineup leaves you following the release of your last studio album? If you are Adrie Klossterwaard, without hesitation you find two new guitarists (Dennis Hartog, Bas Brussaard) and a new rhythm section (bassist Mathijs Brussaard and drummer Toep Duin) from project death metal band Absurd Universe and turn up the afterburners with "The Carnage Ending"- the tenth studio full length from Sinister.

There’s nothing overtly cute or obnoxiously commercial about these 11 tracks on the main album (16 on the limited edition digipack- we’ll get to those bonus covers in a minute). The blast meter appears to be at an all-time, the slower parts add the right amount of a breather while still conveying this ripping heaviness, and Adrie’s low roar will not be mistaken for anything else but growling death. The soloing skills of Dennis and Bas rival the best thrash duos- a willingness to shred and dive bomb while adding some melody to the proceedings.

Favorites include the evil minor chords for "Transylvania", the slow to fast death march of "Crown Of Thorns" where Toep jumps from miniscule beats per minute to energizer Bunny blast mechanics and the circling riff parts for "Blood Ecstasy" that could remind many of the classic Slayer days. The digipack includes 5 bonus covers from some influential acts to Sinister- be it the thrash of Whiplash with "Spit On Your Grave" or Bloodfeast with "Face Fate", or the death influence of Massacre on "Succubus" to name a few, they manage to pay homage in an accurate way while attacking the material with their Sinister spirit.

When done right, there’s nothing wrong with heads down death metal that sticks to the heart of the movement. No gimmicks plus production that resembles what I would imagine the band like live, "The Carnage Ending" forges Sinister’s path onward and I can see them having no trouble appealing to the majority of underground fans.