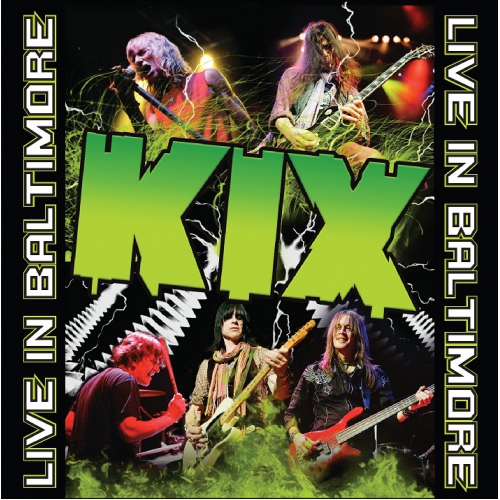 Recorded in front of their hometown crowd, one of the pioneers of the East Coast hard rock movement Kix may not play the circuit as much since their break up in the mid 1990’s, but one can clearly hear through "Live In Baltimore" they have not lost any of their good time party swagger for their brand of blues based, melody driven songs. The 12 songs often consist of audience sing-a-longs ("Cold Blood", the 17 minute closer "Yeah, Yeah, Yeah") or hilarious Steve Whitman on stage raps which extend material beyond its studio versions.

A good portion of the set list consists of material from their 1981 self-titled debut and their most popular album "Blow My Fuse" from 1988- including great renditions of "Atomic Bombs", the anti-suicide ballad "Don’t Close Your Eyes" and the tongue in cheek "Kix Are For Kids". You can tell there’s a genuine level of respect returned from band to audience and back again- and I hope that the younger generation gets a chance to understand the enduring appeal of classic hard rock through the work of an act like Kix. Many may have looked at them as the US version of AC/DC, but there’s just something very interactive and energetic about their hooks, the melodies, the riffs, the grooves- you can feel the sweat beaming off the hair and chests as the musicians strut their wares.

Rumors persist of a possible new studio album from Kix down the line- and that would be awesome as I think the world could use a few more original Kix songs. Until then, "Live In Baltimore" will get you caught up for those clueless about the band.