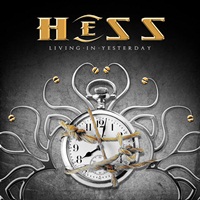 Productivity promotes a steady paycheck- a necessary byproduct from a lean economy and advanced technology where the consumer has 80 different things vying for his attention, consumption, and wallet. A musician who hopes to carve out a living in 2012 needs to keep their eyes on a steady flow of product and promotion – taking matters more than ever in their own hands. Harry Hess may be best known for his work in Harem Scarem, plus his recent First Signal output- well with “Living In Yesterday”, we get his second solo outing to keep his name at the forefront of the AOR/ melodic hard rock movement.

Employing a Heinz 57 melodic rock landscape, one of the first songs that hit me square between the eyes is the Gary Glitter-like/ danceable number “I Don’t Wanna Want You” – featuring guest guitar work from renowned session man Tommy Denander. On the opposite side of the fence, a more mid-tempo number like “Reach For You” embraces Hess’ love for Def Leppard with say an older Bryan Adams sound. Harry really sustains some killer high notes in the power ballad “It’s Over”, the acoustic guitars, symphonic keyboard touches and natural ambiance putting this in a classic 80’s mold.

“Living In Yesterday” I believe has appeal to the current market for people into artists like Vertical Horizon, Tonic or Shinedown with a song like “Don’t Leave Me” in its push-pull emotional swings and softer to louder dynamics just as much as the older AOR fan with a prime time rocker such as “Nothing Lasts Forever”. Strong performances, spot on hooks, diverse tempos and material that gets to the heart of matters quickly- it’s all one could ask for from Hess, and I don’t think will have any problem finding an audience.