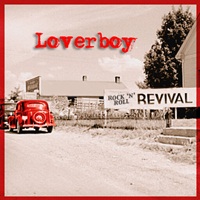 Late August 2002 at Hampton Beach Casino in New Hampshire I witnessed the VH1 Classic tour with Eddie Money, Survivor and this Canadian melodic rock/AOR outfit sandwiched in the middle. They would be my favorite of the night because Mike Reno still could hit those high notes from “Turn Me Loose” and “Workin’ For The Weekend” with the same passion as they were recorded decades before. Performing regularly year in and year out, “Rock N Roll Revival” is a mixed bag release for me- 3 new tracks and 9 re-recordings of 80’s material with the benefit of modern equipment and production techniques.

The title cut opens the record, a mid-tempo number where Doug Johnson’s keyboards play as important a role as Paul Dean’s confident, blues based guitar licks. “No Tomorrow” would be a hit in the late 80’s power ballad world, this one reminds me a lot of Aerosmith back in the “Angel” days. “Heartbreaker” is the best of the three latest originals, Mike’s rapid fire verse lyrics and confident rising notes during the chorus bring this energetic number back to my appreciation for Loverboy throughout the early to mid- 1980’s.

And then we get the 9 re-recordings. Some of them a touch slower than the originals such as “Turn Me Loose” and “When It’s Over”, others given a more 2012 sheen like “Lovin’ Every Minute Of It” or “The Lucky Ones”- but overall not my cup of tea as I felt the originals were well written and representative of that era and didn’t need any updating. I realize the re-recording usually happens to gain more control for the band over their own songwriting property, but as an owner of the discography I would much rather hear another 6-8 songs of fresh material as I know these guys can still write great, catchy tracks.

As such, I would seek out the 3 new tracks through Itunes if you can, and see the band on tour- as they can still deliver the goods in a live environment.