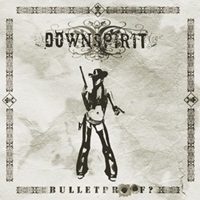 Limited time on planet Earth means individuals who burn with creative ambition often pour out of their brains, fingers, hands, and legs as much as humanly possible. Once one band gains establishment, personal endeavors in another direction may take shape. Guitarist Cedric ‘Cede’ Dupont formed the quintet Downspirit in 2009, probably best known through the years for his work in German acts Symphorce and formerly with Freedom Call. Stepping away from power metal work, this act is more in line with bluesy hard rock and down-tuned, slightly modern metal overtones.

“Bulletproof?” their second album follows up 2010’s “Point Of Origin” start and these 12 songs would fit in very well with most current rock radio formats- quick hitting hooks, staccato-driven guitars, and comfortable melodies the order of the day. Songs like “Life After Her” and “Overlord” appear to toe the line between say Sevendust, Alter Bridge, and Shinedown- at times very aggressive and other times using softer acoustics or bluesy slide guitar parts to convey intertwined emotions. Vocalist Steffen Lauth belts out the lyrics like a seasoned metal singer, bringing to mind Pretty Maids’ Ronnie Atkins on the mid-tempo thumper “Gotta Get Away” or heavier opening salvo “Greed”. Never thought I would hear a rock band tackle the synth pop hit “The Look” from Roxette, but Cedric and the boys handle this well, giving the main hook a slight Middle Eastern twist.

In 2012 I tend to separate originality from execution when it comes to hard rock or metal. Let’s face it- how many more sub-genres and cross-pollinations can occur before it borders on the ridiculous? “Bulletproof?” as a result accomplishes its job in terms of delivering a power groove sound that I’m sure many will dig into and appreciate.

HOLY KNIGHTS – Between Daylight And Pain