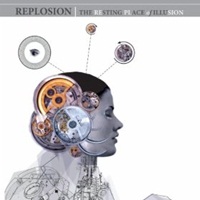 REPLOSION – The Resting Place Of Illusion

Progressive metal has always been one of my favored genres to listen to. My mind engages with musicians pushing their ability to the limit, opening the floodgates with a multitude of riffs, key signature/ time changes, and expressive melodies while pulling this together in a cohesive manner. Where you can have a bass guitarist take the lead for a few measures- where keyboard sounds can be organic, synthetic, or straight piano tones, where you may not hear the singer for 80% of a the song’s arrangement. Whereas in the 80’s and early 90’s it seemed to be more of an American movement, today’s scene sees a healthy European contingent releasing their own original progressive metal albums.

Italy’s Replosion began in 2000 but solidified their current lineup in 2006 with vocalist Fil Palmer. "The Resting Place Of Illusion" is their debut album, a 9 track , 58 minute offering that encompasses many angles of progressive rock and metal from the 70’s through the 90’s. Strains of King Crimson for instance come through on the slower "Starless Nights" with keyboardist Gabriele Marangoni’s swirling keyboard parts setting up this arrangement that also has an atmospheric Pain Of Salvation appeal. Outside Arabic elements open the follow up "Turn The Page"- an album highlight that I think could allow Replosion to catch a wider audience as the cultural elements blend smoothly with the hypnotic drum/ guitar syncopation and there’s another killer Toto-ish keyboard solo to give the band an AOR element.

One band not taken into account on the background sheet for influence is Dream Theater- early songs on this album such as "Your Shame" and "The Unknown God" have the quick hitting guitar stop/ starts, and Fil’s range is very similar to LaBrie , just with a more pronounced Italian accent. Replosion benefit from great production values, because it can be difficult to comprehend everything on display if the sounds are not distinct with separation- so rest assured it’s not a muddy affair.

"The Resting Place Of Illusion" is a good start for these Italians. Those who desire commercially laden progressive metal without robust technicality will find Replosion a fine discography addition.

HOLY KNIGHTS – Between Daylight And Pain