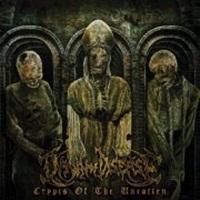 DAWN OF DISEASE – Crypts of the Unrotten

This German death metal act started in 2003 and originally broke up in 2007 despite relative success releasing a mini-CD in 2004. Fortunately a new lineup emerged in the spring of 2009 as co-founder and original singer Tomasz Wisniewski started with the last drummer Mathias Blasse, found two new guitarists in Lukas Kerk and Oliver Kirchner, and by the end of the year bassist Michael Wachter would be the final piece to complete Dawn Of Disease. “Crypts Of The Unrotten” is their sophomore full length and a glorious reflection of melodic death metal where the melody comes from the guitars rather than the vocals and the super serious of this sub-genre should have little to complain about on this release.

Tomasz for starters embraces the musical offerings with a growl from the bellows of his stomach, recalling Dan Swano meets Barney Greenway sans any trace of clean singing passages. The Kerk/ Kirchner duo know when to deliver spine tingling harmonies, the sequence of notes that opens “Calcined Bones” a stair step example of their effectiveness before the riffs race between mid-tempo stomp and bullet train picking madness. The final riffs in another highlight “Catacombs” resemble the slower, grinding to a halt assaults on your senses Machine Head use to employ on “Burn My Eyes”- just with the Dawn of Disease Swedish twist. The rhythm team of Mathias and Michael has their work cut out for them as certain songs blast with abandon like “Knife vs Flesh” while others require a mixture of intensity and groove instincts like “Skinless and Impaled”.

“Crypts Of The Unrotten” slays in the way the original Swedish brigade did from their attention to musicianship and songwriting distinction amidst their sheer heaviness. An alternative to the German progressive/tech death movement, Dawn Of Disease prove there’s nothing wrong with going back to basics.