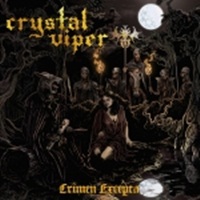 One can picture synchronized head banging or axe wielding movements from the stage as Crystal Viper as a band isn’t afraid to allow the bass a chance to gain the limelight when necessary, where the harmonies can be slow, mystical and evil instead of merely speed exercises- and they also add in cool guest appearances from David Bower of Hell to Piotr Wiwczarek of Vader to make the album that much more unique. Favorites currently include the slower, militant marching “Medicus Animarum” which reminds me of early Virgin Steele and their powerful cover of the early Vader song “Tyrani Piekiel”, paying homage to the beginning days of original Polish metal.

It’s not easy in today’s Cubase, Pro Tools, trigger and sample driven world to produce a metal album and make the human element come across effectively in 2012- but producer Bart Gabriel succeeds with “Crimen Excepta” admirably and fully. Crystal Viper play with dynamics, but never feel like succumbing to pandering their hooks to a lowest common denominator. As a result, this album should be mandatory for those who savor the first two Mercyful Fate records, anything in the J.D. Kimball/ Omen years, and others who just miss leather and chains oriented heavy metal.