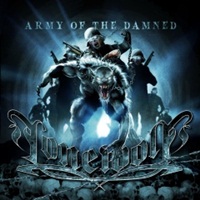 LONEWOLF – Army of the Damned

The French scene may be better known in modern metal times for its technical death prowess, but at the heart of its domestic output are the roots of traditional, true and epic bands. Active again since 2000 and originating in the early 1990’s, Lonewolf fly the flag for old school, Running Wild style power metal. Lyrically they may not subscribe to the pirate tales of their German brethren, but vocally and musically on this fifth full length “Army Of The Damned” you pretty much get the sound of mid 80’s to early 90’s traditional metal with speedy riffing, harmonies abound and mead hall choruses.

Rhythm guitarist Jens Borner and lead guitarist Alex Hilbert lay down a bevy of speed and mid-tempo riffs, sometimes layering things with harmonies and at other times allowing for nice cultural touches such as the ones on “Cold” or the military marching follow up “The One You Never See”. A thunder laden, tranquil introduction soon gives way to Antoine Bussiere’s double bass skills on “Lonewolf” – and throughout the course of the record his steady percussion patterns resemble many of the greats in the business, from Jorg Michael to Mike Terrana. Jens doubles as the lead vocalist, with Alex and bassist Rikki Mannhard handling the background vocals in more of a large crowd/ shouting for the sky effect- and I would compare Jens melodies and epic delivery to a clearer Chris Boltendahl- especially on the twin guitar harmony abound title cut.

Metal to the bone production values, appropriate and chilling cover art, and passionate performances all around make “Army Of The Damned” the best Lonewolf album to date. This should give the German veterans a run for their traditional speed money. Designed for adequate festival settings and will liven up any party full of denim and leather clad individuals.