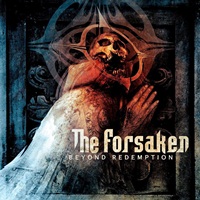 THE FORSAKEN – Beyond Redemption

Nine years can be an eternity to a fan of The Forsaken- yet they’ve had to wait that long for this fourth studio album to hit the streets. Laying low and playing occasional festival/ club gigs when they could while leaving their previous label in 2009, “Beyond Redemption” showcases the Swedish death metal troop in expected sonic jackhammer form. No one will mistake tracks like “There Is No God” or “Foul Messianic Grace” as anything less than savage boulders propelled from the hands and feet of men out to prove they remain steadfast to their non-compromising ways.

Vocalist Anders Sjoholm subscribes to the depths of roaring display- summoning demons from the Christian Alvestam/ Ola Lindgren framework on songs like the diverse “The Light Divine” or the more traditionally, straightforward gloom within “Only Hell Remains”. The machine gun riffing blazing from the hands and fingers of Patrik Persson and newest recruit Calle Faldt carries “Beyond Redemption” as you would expect in an up tempo oriented death metal affair- some of their best work including “As We Burn” and the opening title cut. Drummer Nicke Grabowski must sweat out his water weight when the double bass and snare blasting take center stage- and yet he also knows how to maintain this groove-oriented meter through “Reap As We Have Sown” and the previously talked about “Only Hell Remains”.

Self-produced and mixed/mastered at Fascination Studios, The Forsaken will not disappoint those into aggressive, brutal, and relentless death metal. Sure there are subtle hints of thrash and black metal in some of the parts, but overall “Beyond Redemption” has a main selling point for the fan who doesn’t want any obvious commercial aspects watering down his/her favorite band. Drain the blood, transfuse the hatred and you’ll leave battered but smiling.