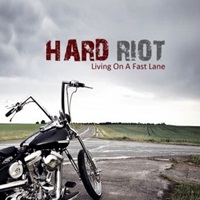 You need a score card to keep up with all the fragmentations and cross-pollinations of hard rock and metal through the years. What can be well appreciated about the movement though is you’ll hear many bands that merely want to plug in and play from the heart- direct, to the point music without much complication or studio tricks. Already this year I’ve been fortunate to take in some killer albums from Spanish band 77 and German upstarts Nitrogods- and here is a young German quartet who with their debut record “Living On A Fast Lane” live in the late 70’s/ early 80’s time period, creating riffs, harmonies and songwriting that blends the hooks of The Scorpions, the rawness at times of AC/DC and the vocals of a cleaner Hansi from Blind Guardian.

“Turn On The Lights” is one of many tracks that has this immediate tenacity – be it the marching snare strains from drummer Carmine Jaucci on through to the addictive but very simplistic chorus harmonies from vocalist / guitarist Michael Gildner that in another era would make it a rock radio staple. The acoustically driven “Nothing But You” features more of a Gotthard effect, the solo skills of Andreas Rockrohr very tender to the sensitivity of this heartwarming ballad. You can tell this axe duo know their way around building the foundation of songs like “Hard Way Down” and “Get Ready” with bluesy, driving rhythms and the occasional counterpoint segment to really get your body moving in unison with the music.

Will Hard Riot become the next young sensation in the hard rock community? Only time will tell- but given the fact that many of our veteran bands are splintering away or nearing retirement, there’s nothing wrong with some new blood to fill the shoes, and this foursome have a great future ahead of them as long as they continue to write magnificent songs such as the eleven on “Living On A Fast Lane”.