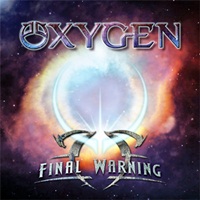 Oxygen is a quartet from Sweden who on their debut album “Final Warning” play 80’s oriented melodic rock. The type where you receive a call and response feel through the catchy choruses as main singer Tony Niva has one of those potent high registers, and the background harmonies encourage you to participate in the proceedings. At 10 songs and 33 minutes these gentlemen don’t waste any time sticking to the clear cut riffing, split between the guitars and keyboards, evoking a spirit of their Scandinavian traditions along with an affinity for bands like Sheriff, Loverboy, and Saga.

Tony has a smoother acceleration to his helium lungs, crossing the path that Rob Moratti and Freddy Curci of Sheriff/ Alias fame- and should bring females to tears with his tender melodies on the ballad “I Remember”. Guitarist Roger Ljunggren gets the chance to flash a little bit of his skill and talent on the fret board a la Pretty Maids or Treat for the more powerful, up tempo “Gold From The Future” and the boy meets girl anthem “I Wanna Know For Sure” that wouldn’t be that distant from Gotthard  merging with Canadian AOR. The incessant organ sounds from keyboardist Marcus Persson come from a North American influence spectrum- as I can hear everything from Toto to Saga in his parts. The only negative would be the song title “Janitor Of Love”- somehow in my mind the two do not go together.

“Final Warning” re-lives the glory years of 80’s rock- times when you would preciously hold onto a particular song for that special someone and make mix tapes for the promise of love. Oxygen take years of previous musical experience and synthesize their knowledge into a potent, energetic melodic rock outcome. Probably for the mid 30’s age audience and above, “Final Warning” beams like a shooting star in the heavens.