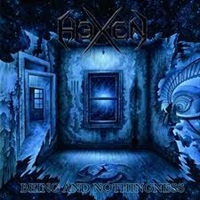 HeXeN – Being and Nothingness

No doubt about it- the thrash movement not only received a kick in the rear from the old guard, but we’ve had a decent new generation of acts plying their songwriting wares. HeXeN represent one of the younger bands, the quartet starting in 2003 and releasing four demos in the following 4 years before their first album “State Of Insurgency” hit the market in 2008. Singapore’s Pulverised Records felt their style very worthy to be a part of their roster, and as a result we have the second full length “Being And Nothingness” to grace our ears and headspace.

HeXeN play a very melodic brand of thrash, but still have plenty of technically minded passages to appeal to those into artists like Heathen, Coroner, or Forbidden. Bassist Andre Hartoonian tackles the vocal chores with a raspy, Ron Royce-like ferocity, although his band mates chime in with occasional gang vocals for the choruses. There will be plenty for the guitar wizards to clamor over- harmonies galore even in the short songs like “Private Hell” or “Stream Of Unconsciousness” that focus adeptly at staying within key even if the arpeggios fly high. New drummer Gio Loyola mixes things up between standard uppity thrash speed and conventional mid-tempo metal grooves, showing off a little of his progressive techniques on “Indefinite Archetype” with the triplet fills, nifty cymbal work and easy of tempo change abilities.

The closing 15 minute epic “Nocturne” could be their “Rime Of The Ancient Mariner” or “Dante’s Inferno”, as Andre gains a bass solo segment in this powerful, twisting and turning track. Overall I think HeXeN could establish themselves as one of the premier acts in the melodic thrash spectrum- the musicianship is stellar and I suspect they’ll gather a strong European/ Far Eastern following through this record.