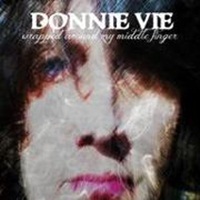 The voice of Enuff Z’nuff returns with a solo album of more psychedelic Beatles influenced soft and hard rock on this 11 song effort. Those who miss his shimmering melodies and attention to connecting with an audience through simplified hooks will love winning material like “Now Ya Know” or the lighter, easy listening sound of “No Escape” which reminds me of classic Elvis Costello. His voice hasn’t lost any edge or emotive mastery this deep into his career- the multi-part harmonies within the ballad “Lil Wonder” reaching the upper sky stratosphere.

In comparison to his Enuff Z’nuff studio records, “Wrapped Around My Middle Finger” isn’t necessarily full bore electric hard rock- most of the songs just have this easy going, light rock meets psychedelic appeal, as if Donnie wants to take some of his favorite styles from the 60’s to 80’s and synthesis things into shorter arrangements. The closer “Lollipop” features more of a swing beat and some nifty guitar lines, the solo very reminiscent of some of the best 70’s players like Gary Moore or many of the southern rock guitar gods.

Bare bones production means what you hear is what you’ll probably get when he takes this product out on the road. I can see “Wrapped Around My Middle Finger” in the hands of ardent Donnie Vie fans quickly, but the rest of the public may need to hear these songs a few times before making this a mainstay in their walking devices. After hearing this, I feel like I need to seek out the first two Enuff Z’Nuff records and remember the greatness of Donnie Vie’s work.