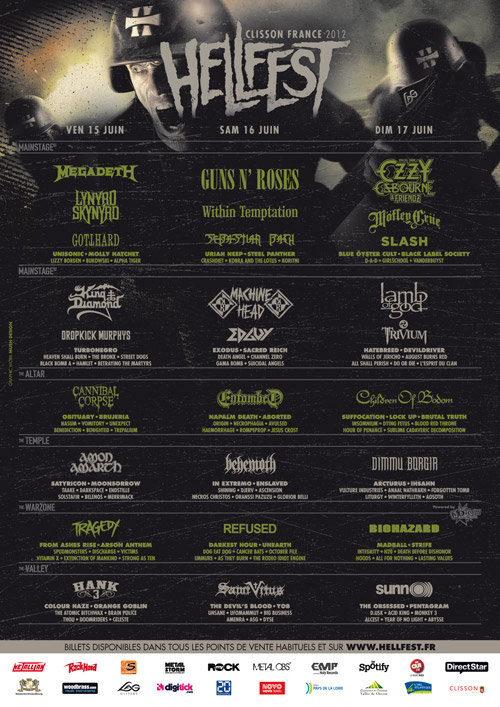 After such a long wait we can at last announce the final bands who will contribute in making HELLFEST 2012’s new battle field, a front like you’ve never seen before!

We are pleased to announce the return to HELLFEST of the great guitar heroes Slash and Zakk Wylde with his group Black Label Society on Sunday’s mainstage. They will both be performing with their bands, but will also be playing alongside Ozzy Osbourne for an anthological show!

Don’t forget that in order to allow this show to happen, we have had to move Uriah Heep and Crashdiet on to the Saturday. We apologize for any problems this may have caused. It was of course out of the question to cancel these groups already announced before we heard about Tony Iommi’s health problems. Problems which have left Black Sabbath no choice but to cancel and for us to adapt and make these last minute changes by inviting Slash and BLS, and moving two groups who we supposed to be playing on the Sunday. Thanks for your understanding.

You will also have another chance to see the crazy Californians from Steel Panther, these guys have a great sense of humor and really know how to put on a show…

Unisonic, an excellent band with Michael Kiske (ex Helloween), Kai Hansen (Gamma Ray, ex Helloween), Denis Ward (Pink Cream 69), Mandy Meyer (ex Krokus, ex Gotthard) and Kosta Zafiriou (Pink Cream 69) will also be performing at Hellfest 2012 and after having listen to their 1st album just out, they might be one of the big good surprises at this year’s festival!

The Italians from Forgotten Tomb will be joining us to reinforce the black metal scene, the Americans from Street Dogs will be playing their street punk a perfect group to get you ready for Dropkick Murphys, finaly the Canadiens from Kobra And The Lotus and their beautiful singer will be adding to the heavy power thrash metal category.

The French scene will also grow with the addition of the Parisians from As They Burn, a band of apocalyptic deathcore, and the restless Strong As Ten from Metz who have been present in the thrash/fastcore category for over 15 years!

In a few weeks time we shall announce the time schedules for each stage, so until then keep well and make sure you’re 100% ready for this year’s battle!

You can still purchase your 1-day ticket for €66 (without booking fees).

3-day passes are still available at the price of €149 (without booking fees) but be fast because sales are really good and for sure, Hellfest 2012 will once again be a success!

How to get your tickets? Click here: HELLFEST 2012 TICKETS

For those of you all around Europe who would like to come by bus, check out our official "Trip" page: HELLFEST 2011 BUS-TRIPS

Thank you everyone for all of your support, the victory will be beautiful and overwhelming and it will be because of you!