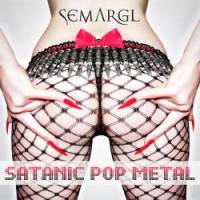 ‘Satanic Pop Metal’ is the fifth album from Ukrainian four-piece Semargl. The title of the album gives it all away, really. Back at their inception 7 or 8 years ago Semargl played fairly straight-up BM with a strong Dimmu influence, but since then, they have incorporated industrial and black n’ roll into their music and gone for a heavier reliance on keyboard.

When I first heard this album, I had the same kind of initial reaction that I did to ‘Illud Divinum…’. I wanted to rip it out of my PC and fling it out the window. The main reason for this being that I hate industrial music and that the keyboards almost verge on techno in some places (techno killed off nearly every single metal venue in my city in the early 90’s, so I have a pathological hatred of this genre). ‘Satanic Pop Metal’ sounds at times like a BM version of Pendulum – the kind of thing you dance rather than headbang to. The cover actually describes the contents perfectly, and I’m sure that looking at it, many out there will love and hate it simultaneously.

However, once I listened to the album a bit more and opened my mind some, I saw that it was full of great riffs, hooky choruses and excellent build-ups. The songs are punchy, catchy and deceptively well-written. The production is great too.

Looking at the score I’ve given this album , you can add a full point if this kind of music is the sort of thing you usually go for. You won’t be disappointed. Remember, I have docked marks due to the dance/techno side to Semargl’s game! If you’re not really into this kind of thing but looking for something different, then it is also worth giving Semargl a listen. ‘Satanic Pop Metal’ is fresh, original, and actually quite daring in its approach. And while the keyboards can be a bit too techno at times, they are implemented with a great deal of intelligence and along with the female vocals that pop up here and there give this album an edge, making the songs both enjoyable and memorable.

If you’re as bored as I am with mediocre, generic BM, then Semargl just might be the thing for you.